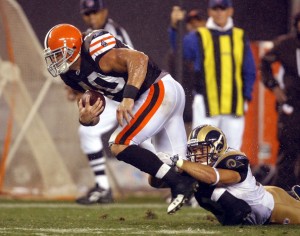 Ok, so the Browns finally won a game and are now 1-3. Though I’m not about to put them in the playoffs just yet, I do think they’ve shown that they’ve made some real improvements from last season. The defense is keeping them in every game and are putting pressure on QB’s without having a stud pass rusher. Peyton Hillis looks to be the real deal and giving up Brady (I’m the 3rd string QB in Denver) Quinn looks to be the best decision of this new front office. He brings intensity and an attitude to the running game that hasn’t been seen since Kevin Mack was destroying opposing LB’s. Seneca Wallace has proven his worth and could easily be the starting QB the rest of the way. I see Delhomme on a short leash. Overall I’m still disappointed they’re not at least 2-2 but the direction of the team is positive. They’re building blocks look to be for real. It’s been a long time since a Browns’ fan could say that. -DM