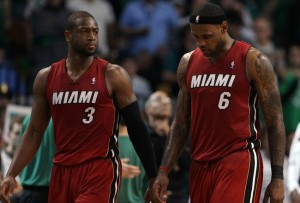 Every Cleveland Cavalier fans worst nightmare is becoming more of a reality with each passing series the Miami Heat, and in particular Lebron James, win. Things looked promising for fans of the Cavs, like myself, when midway through the season it seemed as though the Heat were nothing more than three superstars struggling to find an identity. Both Lebron and Dwayne Wade were playing the same type of game and neither seemed to have any desire in changing what made them two of the top players in the NBA. You could see why so many NBA “experts” said the two of them would struggle to coexist. On top of that, Chris Bosh was regularly a non factor in games and looked as though the constant media attention and pressure was getting the best of him.
You can imagine how it pains me to say that those days are a definite thing of the past. Lebron and Wade seemed to have found a common thread in their games and opposing defenses are paying the price. Ask any player on the Boston Celtics how you go about trying to stop arguably the two top penetrating players in the NBA when both happen to be on the same team. In addition, Bosh has settled into a role that fits his game and no longer looks like he’s trying to live up to the hype of being a “superstar.” However, the fact that every other player has similarly bought into playing their own type of role could be the biggest reason why the Heat are only 4 wins away from playing for an NBA title.
Yes, it hurts just thinking about it. GO CHICAGO! -DM