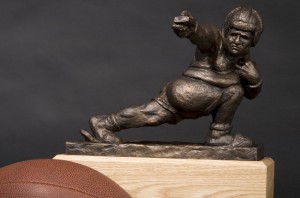 What the hell is going on in this world when you can’t even get naked in your hotel room without being video taped by some pervert? As I’m sure all sports fans probably have heard by now, ESPN sideline reporter Erin Andrew was video taped by some loser while she was changing in her hotel room. The guy apparently followed her to the hotel and checked in to the room next to hers. He then proceeded to video tape her while she was naked and looked to sell the videos to the highest bidder. Oh, just one thing–IT’S ILLEGAL YOU IDIOT! If it wasn’t hotel room walls across the country would look like swiss cheese from all of the perverts drilling holes in them.

Well, I don’t think this guy will be peeping through any cinder block walls while in federal prison in an effort to look at the guy in the cell next to him. However, I have a feeling his own peep hole may be violated a few times.