The fantasy football playoffs are in week two and my league’s trophy is still within reach.  I’m stunned that I actually pulled out a win today and will move on to the Super Bowl next week.  One thing you can always count on in fantasy football is that you can’t count on anything.   The team I was playing had Luck, Charles, Blount, AJ Green, Sanders, Fleener, and JJ Watt.  His team was stacked for a 14 team super competitive league.  My key players, on the other hand, are Wilson, Vereen, S. Jackson, D. Thomas, Megatron, Gronk, and Borland.  Yes, my RBs are terrible!  But hey, luck doesn’t care about terrible.  It shows up when you least expect it and I certainly didn’t expect Charles, Blount, Sanders, and Green all to crap the bed.  But I’ll take it.  Hopefully next week I can say I’ll be taking home the trophy. 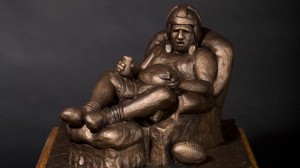