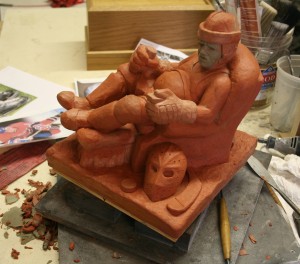 It’s been months in the making, but he’s finally ready to sit his ass next to the other armchair legends. Hockey fans everywhere (OK, mainly Canada) have been asking when I was going to sculpt a trophy that would capture the true essence of the diehard fantasy hockey fan. I gotta believe those questions have been answered.
Tomorrow he’ll move on to the mold making stage so that hopefully we’ll be able to get our first cast before the playoffs begin. That’s the goal.
What do you think?