If packing groceries, like Kurt Warner once did, were a part of the NFL combine- I would’ve been a first round draft pick and well on my way to the Hall of Fame. Believe me, I’ve said “paper or plastic” more times than I care to remember while working my way through college. Yet the only thing it got me was a stupid blue apron that smelled like cheese.
Warner announced his retirement today and his story is one that after school specials dream about. He was a journeyman QB who once bounced from the Packers practice squad to the Arena League and then to NFL Europe. He would then return to the NFL where he became a Super Bowl champ and a two time league MVP with the St. Louis Rams. It was there that his Rams offense would be referred to as The Greatest Show on Turf as Warner shredded defenses with pinpoint accuracy and unmatched guts. After the Rams he went on to the Giants, gets benched because of Eli Manning, 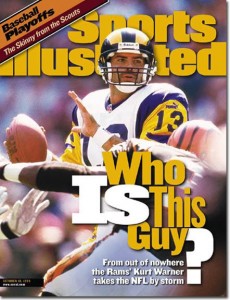 and then goes to the hopeless Cardinals to ride the bench behind Matt Leinhart. Only he doesn’t see it that way. Instead Warner goes on to push the USC hotshot to the bench and eventually takes Arizona to the big game where he came just seconds away from winning his second NFL title. The debate that I’ve heard on the radio today that Warner may not be a shoe-in for Canton is a joke. Did I mention that Warner started playing in the NFL when he was 28? Yes, 28!
Start carving his bust now. And if you think it’s still up for debate try this one on for size. I couldn’t believe it when I heard it by one radio listener and had to look it up myself.
-“Fourteen quarterbacks have been elected to the Hall of Fame in the last 25 years, and Warner has a better completion percentage, more net yards per pass attempt and more yards per game than all of them.”- Wikipedia
Congratulations Kurt Warner on an incredible career and I’ll be seeing you put on that ugly yellow coat in Canton very soon. Maybe I’ll bring my blue apron when I go and drape it over your bust in honor of a guy who truly embodied the never quit attitude that so many of us preach to our kids and wish to live ourselves. The blue apron may be more comfortable for you anyway. I’ll even try and get the smell of cheese out of it. -DM