I’m finally able to watch the Tour de France on Versus this year and wouldn’t you know it-  Lance Armstrong isn’t going to win it.  The 37 year old Texan just doesn’t have the stamina or the legs to compete with Alberto Contador in the mountain stages- nor should he.  Contador is 26 and in the prime of his career.  The Spaniards only weakness is said to be he can be a little overly aggressive on stages 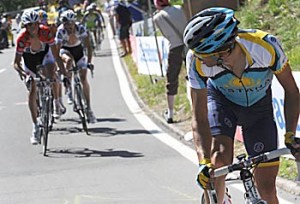 that ultimately have cost him in the past.  However, many believe Contador would be going for a third straight Tour victory if it wasn’t for the ban handed down to the Astana team for a doping allegation that Contador wasn’t even involved in.

As for Armstrong, age will always be the great equalizer. Besides golf and  Tom Watson, most athletes will never sniff a major victory once age becomes a factor.  The big question for this years tour was could Armstrong keep up with Contador and the top riders.  Yesterday answered that question for me and millions of other interested viewers.  It’s just  a shame that age once again has reared it’s ugly head and taken another great athlete from us.