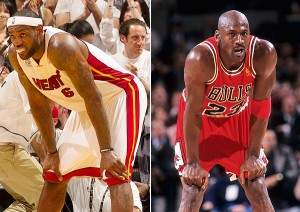 One thing  everyone should take from these NBA Finals is that the comparisons of Lebron to Michael Jordan need to end.   This whole notion that somehow Lebron can be the best player in history is obviously being pushed by the media to stir up controversy and get people talking.  I guess it works because here I am writing this post.   But it’s time to put the Lebron/MJ talk to bed.  Watching these Finals one thing stands out to me more than anything else-  Lebron disappears for huge amounts of time.  Yes he makes the amazing block, pass, dunk, or steal that everyone remembers- but there are chunks where you almost forget Lebron is even on the floor.  I found myself looking at the Heat line-up on numerous occasions during game 5 just to make sure he was out there.  That NEVER happened when Jordan was playing.  Especially in the NBA Finals.  Jordan demanded double teams, hard rotations on defense and even “rules” for how some teams thought you had to defend him.  One thing all of them had in common was that none of them worked.   Jordan’s insatiable drive to win was the factor that opposing teams couldn’t game plan for.  His thirst for perfection and greatness, not only of himself but of his teammates, is what truly separated him then and now from any other player in history- especially Lebron.   And let’s not forget why Lebron went to Miami in the first place.  He wanted an easier route to a championship and didn’t want to be THE GUY any longer.   Jordan’s lack of a championship early in his career forced him to take a slightly different approach.  He worked out even harder in his off seasons, putting on added muscle and developing one of the deadliest jumpers in the game along with improving his defensive skills.

The smartest thing Lebron ever did was to change his number from 23 to 6.  After all, he knows there is only one Michael Jordan.