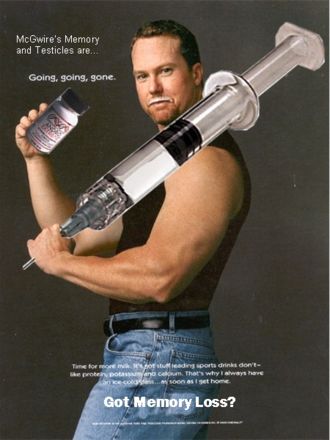 Mark McGwire just admitted to using steroids when he broke MLB’s single season HR record in 1998. This also in–the sky is blue. Are you kidding me? This guy gets a job as the hitting coach for the Cardinals and now he decides to come clean. Sorry, but you and all of the other players of that era deserve to have your names and stats dragged through the mud. As McGwire and his other cheater, Sammy Sosa, were shooting their roids- MLB was turning the other cheek and deserves just as much blame. Bud Selig and the rest of baseball knew that the HR chase was tailor made for getting fans interested in baseball again, and they pretended they had no idea what was taking place behind closed doors. Please. Anyone with two eyes knew that the players were getting bigger and balls were jumping out of ballparks around the country. Remember all of the talk of balls being wound tighter. What a bunch of bullshit.
Now Tony LaRussa is saying he had “no idea” that McGwire was using steroids. Sure Tony, we believe you. How could you have known? You were too infatuated with the fact a guy, who was on the verge of retiring, was about to break the most haloed record in all of sports. Never mind the fact he looked like the Hulk and was a freak of nature and stronger than he had ever been throughout his entire career. No, how could you have known he was shooting roids? Maybe LaRussa doesn’t realize the sky is blue either.
Is it just me or does Jose Canseco sound more believable every day?-DM