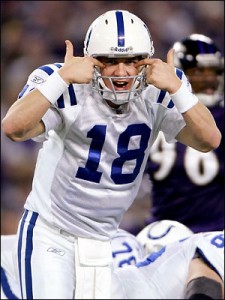 The chiseling of Peyton Manning’s face on the Mount Rushmore of quarterbacks can be put on hold for a few more years. Joe Montana, Johnny Unitas and Otto Graham (remember I’m a Browns fan) will just have to wait for that fourth and final QB to be added. Manning isn’t quite ready for the immortality of which a granite figure would represent. Not just yet. However, he’s no doubt been molded in clay and is ready to move beyond Favre, Marino, Brady, Elway, and Starr into that coveted 4th position. Remember, he’s still only 33 and could realistically have 5-7 more years left in the tank. He has the record for most NFL MVPs with four. Along with being a 9 time pro bowler and 5 time first team All-Pro. His statistical stats are practically unmatched as a whole and currently sits in 3rd place overall for touchdown passes and 4th for passing yards. In other words, get the dynamite blasts ready to go. Now I know- last night he threw a ball that cost the Colts a chance at their 2nd Super Bowl title. (Reggie Wayne didn’t help either) But let’s all relax people. One throw doesn’t make a guys career and define his legacy. And surely he shouldn’t be judged for the inability of the defense or special teams to make an impact in the second half of that game. No, Peyton Manning will be judged at his entire body of work when it’s all said and done. The way it should be. The way it was for John Elway. Cause lets all remember that 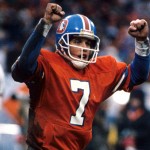 Elway’s legacy wasn’t cemented until he finally won the two Super Bowls in his final two seasons. His other 3 tries became more of a footnote on an incredible hall of fame career. I just wish that footnote didn’t hurt so much when it was removed from the ASS of this still bitter Browns fan. Damn you John Elway.
Sorry, I’ve digressed and now need a beer.-DM