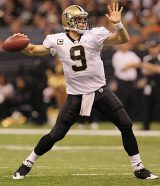 This Super Bowl is setting up to resemble two middleweights just punching the hell out of each other and seeing which one is standing in the end. Hagler vs. Hearns anyone? Let’s hope so. I say middleweights and not heavyweights because neither team has that knock you flat on your ass style of defense that can just punish an opponent. Now don’t get me wrong- the Saints have a swarming D that causes turnovers and seems to be in the right place at the right time. Especially in the playoffs so far. Good thing, because they’re going to need it against Manning. The guy just doesn’t make many stupid mistakes. However, they just don’t have the corners to cover Wayne, Clark, Garcon or Collie- and Manning is going to exploit it.
The thing is, with Indy’s defense you can say the exact same thing. Drew Brees is going to shred the cornerbacks of the Colts and especially with Dwight Freeney being less than 100%. The only way to slow down Brees is to pressure him and throw off his timing. If he gets in rhythm this thing could really get interesting.
It’s rare that the two best teams in the league play each other at the end of the season, but this looks like one of those times. Kickoff can’t come soon enough.
My pick: Colts 45- Saints 38