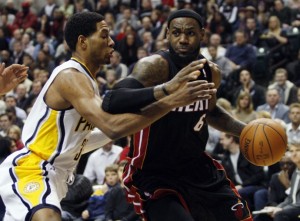 Everyone that visits my blog soon realizes that I’m a diehard Cleveland fan. So when Lebron won his third MVP title the other day I had a few guys make sure I knew about it by leaving a comment on the FantasyTrophies.com Facebook page or by sending me an email. A few did it with more of a jab to the gut than a nice little tap on the shoulder I might say.
Anyway, my feeling on the award going to Lebron is that he truly deserved it. He still remains the best player in the world during the regular season. Sorry Kobe and Durant fans, but Lebron has a better all around game than either one of them. However, before people start grouping him with the likes of Russell, Jordan, Wilt, Bird and Magic, I think I’ll keep him with Barkley, Stockton, Malone, Reggie Miller, and George Gervin. Guys that had great careers but never won a title. Individual awards and recognition are great, but until Lebron gets the monkey off his back he still will remain the greatest athlete ever to not have a ring. Somewhere Dan Marino is smiling. And I must say, so am I.