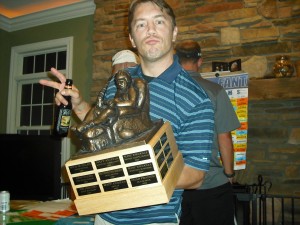 Maybe your league will be represented in the pages of the magazine come fall!

It happens all the time. I go on Twitter and see a guy post something about his league receiving his fantasy football trophy. It’s almost always accompanied by a twitpic or some instagram photo, so I can’t help but see if it’s one of my hand made trophies. After all, the excitement in the tweet is obvious and I’m confident that a trophy of mine would produce such a response. But when I click on the link I’m blown away by the piece of CRAP the guy is bragging about. It’s literally a pee-wee football trophy with some lame plaque on the front that says “fantasy football championship trophy.”

If you don’t believe me, go to Twitter and search “fantasy football trophy”. You’re pretty much guaranteed to see one.
I guess what amazes me the most is that after spending hundreds of hours a season researching what players to draft, start, and trade– leagues then decide that they’ll have some cheap, lame trophy represent their fantasy football league. It really makes no sense to me.
The first trophy I sculpted, The Armchair Quarterback, was because I wanted something that truly represented fantasy football and the insane amount of time I was dedicating (my wife says wasting) to it. No pee-wee trophy or golden Lombardi knockoff was going to cut it.
So please guys, I beg of you– before you make that fatal mistake of so many other leagues out there, think for one second and realize your league deserves more. It deserves the best. Don’t those endless hours you obsess over fantasy football mean more to you than that “trophy” you can buy for $69.99?

And don’t even get me going on the fact they’re made in China.

Written by
Dave
Tagged
casting, cheap trophies, fantasy, fantasy baseball trophy, fantasy football trophies, fantasy football trophy, fantasy sports, football, football league, football trophy, mold, NFL, nfl draft, perpetual trophy, silicone mold, top rbs 2012, trophies, trophy
The NFL season might be months away and rookie camps are just beginning, but fantasy football trophy season is just getting started at FantasyTrophies.com. This is the time of year that I pour new molds for all of the football trophies and start casting for that mad rush in the fall. It never fails that I’ll get a panicked commissioner calling or emailing me a week before his draft saying that he desperately needs a trophy. All of my past customers know that I do my absolute best to make this happen but sometimes it’s just not possible. I definitely feel like I’m letting these few guys down. That’s why this year I’m starting earlier than ever building inventory so that when those orders or calls come in I’ll be prepared. Hopefully they won’t have 20 years of past champions to engrave though. – Dave