Fantasy baseball drafts are rapidly approaching and many leagues are going to decide to play for a trophy.  The guys of “Stealing Signals” of Chicago are one such league.  Mike, the commissioner of the league, reached out to me and had a few questions regarding the Armchair Ace.   He admitted that his call was really just to pacify other league members who were on the fence over playing for a trophy.  Mike also informed me that he’s in a fantasy football league that plays for The Throwback so he understands what a trophy can do for a league.  I have no doubt that they’re going to experience the same excitement once the Armchair Ace shows up and represents their league for years to come.    As Mike said, “It all boils down to getting your name on the trophy.  The money is just gravy.”  Good luck Mike.  I’m pulling for you. – Dave

Today was spent prepping the Throwback Fireman fantasy football trophy so that it could receive a brush-on coat of silicone.   It’s somewhat a tedious process but one that needs to be done in order to insure every detail of the original sculpture is present in the final cast.  You can see in the photo that the brush-on coat is very thin.  We do this on purpose so that very few air bubbles appear on the surface of the sculpture and if they do we can easily pop them.  We’ll let this cure for 24 hours and then tomorrow the remainder of the silicone will be poured.

I think the time has come for the fantasy football trophy I sculpted for the police to move onto the mold making stage.  It’s always tough to put the carving tools down and say a sculpture is finished, but I feel this trophy has reached that point.   The handcuffs are completed, the nightstick is done, and his glasses and hat are about as good as they’re going to get.  Not to mention the donut is perfectly perched on the edge of the armchair and his mustache  and shoulder holster looks right out of “Barney Miller”.  For all you police officers out there, please be patient. He’ll hopefully be ready for pictures  by the end of the week and then he just needs to go up on the site.  -Dave

A few months ago I received an email from Ali, a policeman here in Brooklyn, asking if I would be able to sculpt a fantasy football trophy for cops.  At the time I was busy stocking up on inventory for the beginning of football season and said I wouldn’t have the time and that a custom trophy would cost quite a bit.  Though disappointed, he understood and said if I ever developed a trophy specifically for cops he’d be the first to order one.  A couple months later I found myself having a similar conversation but this time with a fireman in Florida.  The difference however was that I had some free time and thought I’d give it a shot.  The Throwback Fireman would soon be born.  I liked the results so much that I put it up on my blog and since then have sculpted an Armchair Quarterback Fireman to rave reviews.   Both trophies will soon be available on FantasyTrophies.com.

Re-enter  Ali.  Seeing that I went ahead and sculpted a trophy for fireman and not the police, Ali reached out to me once again.  He was incredibly enthusiastic about seeing a similar trophy sculpted for cops and went gave me a number of reasons why it would be a great idea.  It didn’t take much convincing.  I knew it would be a hit and something I’d really enjoy doing.  The  great thing is that Ali and a few other Brooklyn policemen want to stop by the shop at some point to help work with me on the overall design and to brainstorm some ideas.  One thing that I definitely wanted to be a part of the design was a nice mustache and aviator glasses.  I was so excited with the idea that I got right to work.  As you can see, the Armchair Quarterback Policeman is well on it’s way and a fantasy football trophy that will stand alone to represent policeman everywhere.

If you have any questions please email me at  -Dave at FantasyTrophies.com

I’m in the middle of getting bombarded with plate orders and almost forgot I had to engrave a plate for my own league.  It’s always tough engraving a plate for the fantasy football trophy I SCULPTED when my name isn’t on the damn thing.  It’s especially tough engraving a plate though when my buddies Bill and Dan won the league again!  That’s three titles in the span of 10 years.  A feat that has never been pulled off in the history of my league.  They’re the only three time champs, along with myself, in the 24 years our league has been in existence.  I just pray they don’t go back to back.  I’ll never hear the end of it if they do.

As I sit in a campground in Moab, Utah, getting ready to skydive,  I, for some bizarre reason, started thinking about how FantasyTrophies.com came to be.  Fantasy Trophies started way back in 1993 when I was going to art school at Kent State University and decided I’d sculpt a trophy for my fantasy football league.  I was taking all kinds of classes that emphasized looking at naked people all day so that I could learn about human anatomy.  One of those classes was life sculpture.  Even though I was a painting major, life sculpture turned out to be one of my favorite classes.   Anyone that has ever taken a sculpture class knows the demands of trying to capture a likeness or the subtleties of the human form.  I thrived on this challenge.

It was in this class that the idea came to me to sculpt a figure that would become my fantasy football league’s crown jewel- The Fedele Trophy.   I grabbed some clay and went to work sculpting a figure based off of my cousin Johnny.  Talk about an uncomfortable phone conversation when I asked him to model.   My cousin was all in though and loved the idea.  After some preliminary sketches, I went to work.  The figure was probably completed in about a month or so and then I had to make a soft plaster mold and pour the trophy using a much harder casting plaster.  After it came out I painted it and then mounted it on a pine base.

Looking back now I realize what a piece of crap it was.  However, that fantasy football trophy turned out to be the impetus for what would later become a business run first out of my parent’s garage and now out of a shop in Brooklyn, NY.

You never know when a great idea will strike.  I’m just glad I had one while going to college.  One in 4 years isn’t so bad I guess.  I’m not sure the idea to skydive will go down as one of those great ideas.   We shall see.  Photos to come later. 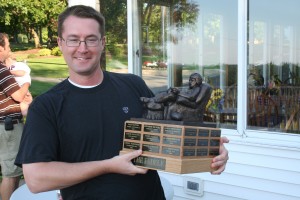 I just wanted to again mention that I’ll soon be taking a much needed family vacation and won’t be in the shop to fill any fantasy football trophy orders that come in.  Try not to panic though, I should still have plenty of time to get any orders that come in during that period out before you have you have your draft.  I realize how important it is to have your trophy for the big day and you have my word that I’ll do my very best to get it out to you by then.   It’s always best to get your order in sooner rather than later though to ensure your trophy will get out my doors in a timely manner.  It gets really crazy around here in late August, early September.

I’m always trying to improve the process by which each trophy is produced.  One of the ways to do this is to look at each mold and see if it can be made smaller to fit in the pressure pots.  Pressurizing the resin as it sets up ensures that few or no air bubbles will be present when we take the cast out.  This also lessons the time it takes to prep a trophy for the painting stage because air pockets need to be filled before a trophy is finished.   Another way to improve the casting process is to streamline it in any way we can.  This week my mold maker James tackled making the mold for casting the clubs for the Mulligan golf trophy.  Instead of doing one at a time, he’s building a mold that will capture 10 fiberglass rods that will become the shaft of the golf club.  The resin will flow down the 2 part mold into small cavities forming the club heads.  It’s a time consuming process building a production mold like this but in the end it will be one more example of how we’re always trying to improve upon things at FantasyTrophies.com. 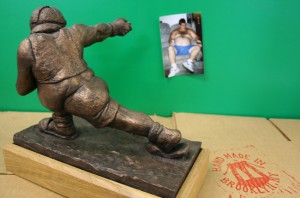 Written by
Dave
Tagged
beer, cheap trophies, draft, fantasy, fantasy football, fantasy football draft, fantasy sports, football, football league, football trophy, hot girl, huge breasts, nfl draft, perpetual trophy, trophies, trophy
My buddy Ed over at Commishkit.com and I teamed up to run a contest that offers a FREE Armchair Quarterback Mini trophy. The league that sends Ed the best photo of their league with one of his draft boards will take home the prize. Just to be clear– it’s the trophy, not the girl.