My Cleveland Browns unveiled their new uniforms yesterday and I gotta say, I like them.   I was skeptical when I heard that they were going to make a change but these uniforms push the Browns into the future a bit with still keeping a sense of history.  You can’t please everyone and I’m sure there are fans that absolutely hate them and think the Brown and Orange should remain loyal to the days of Otto Graham and Jim Brown.  I thought this same thing when the Browns returned to Cleveland back in 99 and there were rumblings about a uniform change.  However, the younger generation of players don’t know a thing about Browns history and instead want to wear  a uniform that has some flash to it.  When programs like Oregon are changing their uniform on a weekly basis and college teams are pushing the envelope on uniform design, modern day players don’t want to wear something that reminds them of their grandparents.  It’s proven that performance can be linked to appearance.  Here’s hoping this new look can help them win more than 5 games.  Of course hitting on the draft would help too. 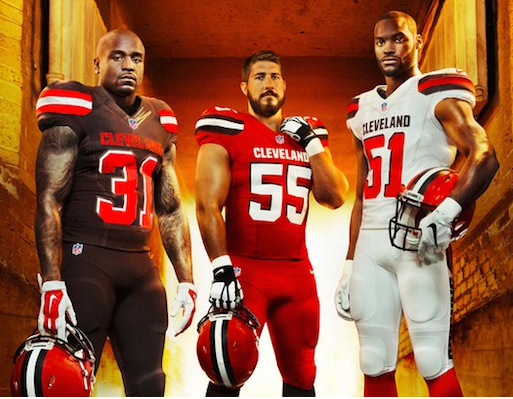