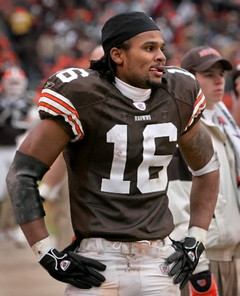 It’s nice to see a player get rewarded for not only his hard work on the field, but for his class and dignity off of it as well. Josh Cribbs has done everything, and then some, that the Cleveland Browns have asked of him. He’s become arguably the best kick/punt returner in NFL history, is now the face and leader of the franchise, and has set up numerous charities that make a true impact on the lives of so many. You get the feeling with Cribbs that if the Browns asked him to sell hot dogs at halftime he’d wonder “footlong or regular?” Let’s just say that he was never mistaken for Braylon Edwards.

Cribbs came out of Kent State as an undrafted QB that got an opportunity with the Browns because they kept the tradition Paul Brown started with the team by giving local talent a chance to tryout. He made the best of that opportunity. Never once, even after making the team, did he complain that he should be a QB and that his talent wasn’t being properly utilized. Instead he put everything he had in to his new role as a return and coverage guy. He quickly became a fan favorite because of it.

When Phil Savage promised a new deal, Cribbs stayed patient and optimistic. He let his play do the negotiating for him. Soon Eric Mangini would become the one holding his future in his hands and again, Cribbs remained focused on his job. It wasn’t until after the season ended that he finally stated his frustration with the team and said he thought his days in Cleveland were coming to an end. Luckily it never got to that point.
Mike Holmgren came in and expressed his desire to keep Cribbs during his first press conference with the team and he stayed true to his word. A true breathe of fresh air. Cribbs’ contract will hopefully go further than what it will do for just him and his family. It’s obvious that the desire of the team is that it will show other players that if you bust your ass, stay out of trouble, become a team player, and handle your business internally- you’ll be rewarded in the end. Oh, and don’t punch Lebron’s friend in the face.
If only all players could live by Josh Cribbs’ formula for success. -DM