Written by
Dave
Believe it or not, FantasyTrophies.com has been around for nearly 15 years now and many guys have asked me how it came to be. It all started when I sculpted the original Armchair Quarterback while an art major at Kent State University in Kent , OH. At the time I was taking only classes that involved looking at naked people all day- Figure Drawing, Figure Painting, and Figure Sculpture. Unfortunately when you go to art school you realize early on that you won’t be looking at very attractive people on a daily basis. Heidi Klum they are NOT. Anyway, during this time I was in a very competitive fantasy football league with my buddies back in Cleveland and I thought I’d put this art degree I was earning to some use and sculpt a trophy. I knew I had to come up with something good and a trophy that would capture the true essence of the guys in the league. I had seen all of the lame excuses for trophies that were out there and continue to pollute the web and knew they didn’t come close to what I wanted. No, this fantasy football trophy had to be an original. It had to say it was ONLY for fantasy and not be mistaken for the pee wee football trophy you were given in 5th grade. Thus, the Armchair Quarterback was born. 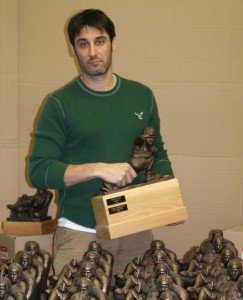 The unveiling took place on draft day in 1993 and the guys went nuts. Our league’s prize money instantly ended up taking a back seat to the trophy, which became known as The Fedele. (story for another blog post) Now the trophy is on it’s 19th year of honoring our past champions and the desire to win it has only grown. Guys that have won it twice have ultimate bragging rights while the ones who are not on it at all continue to experience the unending ridicule that only beer drinking “friends” can dish out. After seeing the reaction of my friends and what the trophy did to the competitive level of our league I knew that other leagues out there could benefit from my creation. Soon FantasyTrophies.com came to be. Since that unveiling I’ve moved to Brooklyn, NY, got married, started a family, and teamed up with two other artists who share my passion for creating the best, most original fantasy sports trophies ever. As you can see on our site, I’ve gone on to sculpt trophies for baseball, basketball, and nascar and will continue to try and put that Art degree to good use for the benefit of fantasy leagues everywhere. After all, having to look at the naked people I

did for nearly 8 hrs a day should amount to something in life.-Shouldn’t it? -DM