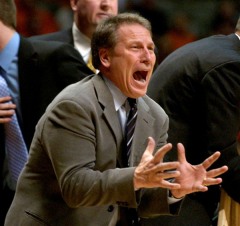 Remember the feeling when you’d go to a party and you’d take that initial glance around the room? Instantly you knew if you’d be staying or going. It usually only took a split second, but you could tell in that moment if it was going to be just a good night or one to remember for the ages.
Tom Izzo just showed up at the party and has started his initial glance around the room. He’s doing his best to stay positive, but as of right now he doesn’t really see a reason to stay.

“Hey, I know that guy. He can get this party going,” he says to himself as he glances over at a large, familiar looking, 7 foot guy sitting at what seems to be a buffet table. As he moves closer though he realizes the guy is at least 60 pounds heavier than he remembered him to be and he suddenly has no interest in talking with him. Not to mention Tom soon learns that the guy really was only invited to the party this one time and probably is going to be asked to leave soon.
Suddenly a buzz goes around the room that an All-Star just pulled in the driveway. Tom becomes entangled in the mob of people making their way to the front door trying to catch a glimpse. “Is it him?,” one guy shouts only inches from Tom, nearly rupturing his eardrum. ” I’m not sure,” another guy cries out. Suddenly the figure exists his car. Tom can feel his heart racing. “This is it. Finally this party is going to pick up.” As the shadowy figure gets closer, Tom feels the energy leave the room. He realizes the guy only stands about 6′ 2″ and worse yet, came to the party empty handed. Not even a 6 pack of Pabst can be seen under his arm. When confronted on why he’d show up to a party empty handed his only excuse was that he was a major reason why the brazilian guy, the 7 foot bald guy, and the one with the gun in a guitar case were at the party in the first place. He then instantly went into the corner and was never seen or heard from again for the rest of the night.
Tom’s now getting anxious. He knows this party is going nowhere fast and he can’t rely on this cast of characters for a good night. He’s ready to sneak out the backdoor and head back to Michigan to call it a night when all of a sudden he turns and bumps into the guy who’s throwing the party. As Tom collects himself he can’t help but notice that the guy’s pockets are overflowing with cash. “I think this party just got more interesting,” he thinks to himself. “I think Michigan can wait.”
Tom finds himself in the awkward position of listening to another wealthy businessman talk about how willing he

is to spend his money and how he can make Tom rich beyond his wildest dreams. It’s a position Tom has been in before. Only this time he realizes he’s listening a little longer, a little more intently.
Tom listens for what seems to be hours. He’s promised all the money he could possible imagine and even the use of a private jet if he just stays. The luxuries seem to be endless, but he knows that there seems to be something missing.
As Tom approaches the front door to go home he scans the room one last time to see who’s still at the party. He swears he smells the subtle hint of talcum powder in the air and feels an incredible urge to stay. His mind is now racing and is no clearer than when he had first arrived.
“Maybe I’ll give it a little more time,” he’s heard whispering to himself as he heads back in to take one last look around. “After all, I could’ve missed someone.”