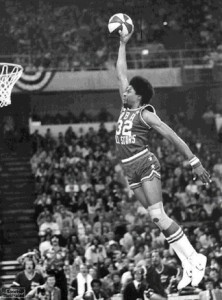 I miss the old NBA. I miss players like Darryl “Chocolate Thunder” Dawkins, George “The Ice Man” Gervin, World B. Free, Moses Malone, Magic, Bird -and of course, Dr. J. Though the argument can be made that the athletes of today are more athletic and skilled, the game back then seemed to be about something more- something real. It was a day before major shoe contracts and endorsements deals. A time when guys played to win and not so that they could “get paid” when their existing contracts expired. It was about loyalty to a city and to a franchise. At least it felt that way. A time when rivalries dominated the game and dynasties had to be conquered. Ahh, the good ‘ol days. Boy do I sound like my Dad right now.
I think back to that feeling of when I was a kid and walked into Richfield Coliseum for the first time and saw Dr. J warming up. Being in awe because I was in the same building as Julius Erving. Sitting and watching his every move. First from the cheap seats and then, after halftime, from midcourt thanks to my Dad’s sneaky maneuver.
I think back to the days when my bedroom walls were covered floor to ceiling with posters of all the players I admired. I had em all- including Kareem’s sky hook, The Doctor doing a finger roll and Moses Malone parting the basketball sea. My room was a sports Sistine Chapel- a tribute to the greats who helped shape the game.
I suppose all of this reminiscing is because the All-Star game will be played today and, much like myself, my son will have absolutely no interest in it. Even though I’m sure I’ll at least catch the last 5 minutes. It’s just that now the game feels that it’s more about what shoes will be unveiled (Lebron) and discussing who will be on what team next year. (hopefully NOT Lebron) A game that will be bombarded with product placement ads and seeing what player is in the most commercials pushing who knows what. I suppose I just need to come to grips with the fact that we’re in an era that is more about selling those products than the game itself. It’s hard to do.

Here’s a little bit of the Doc- enjoy.